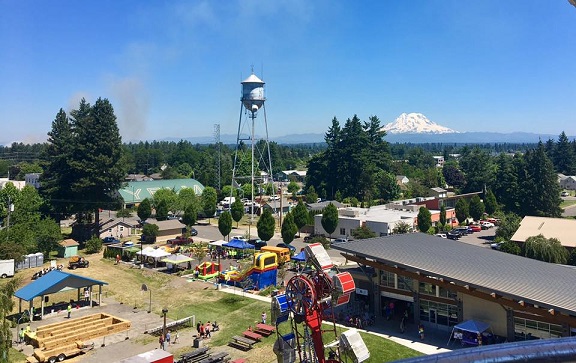 – Editor’s note:
The Yelm Business Assn. (YBA) planted the seeds in developing the concept that Yelm’s economy is based on support services for a bedroom community, which can not fully sustain economic viability. The YBA advocated that the best way to support our local businesses is to draw visitors to our city. The YBA embraced the tourist/visitor promotion group for all of Thurston County, Experience Olympia & Beyond.

Experience Olympia & Beyond CEO Shauna Stewart said her team will use the YBA donation of $1,086 to specifically promote Yelm tourism. Stewart’s team will create content to be promoted relating to Yelm, i.e. day and night trip packages to places in and around Yelm, which would include local attractions such as the Deschutes Falls Park. They will post entries on their various social media sites, including a dedicated Yelm page, about things to do and see in Yelm. Additional plans for the funds include promoting Yelm’s various summer events including UFO Fest, Jazz Fest and Prairie Days.
Click here for the dedicated Yelm page.

– In addition to Standing Room Only (SRO) plays drawing visitors to The Triad Theater from around the South Sound, the Yelm Farmers Market moving back to downtown Yelm will also draw out-of-town visitors. These events will be Yelm’s hallmark annual features developing a foundation in attracting visitors: