Yelm finally sees the city’s “woo-woo” reputation as an asset, to much acclaim, 2nd annual UFO Festival and Symposium gets underway today! 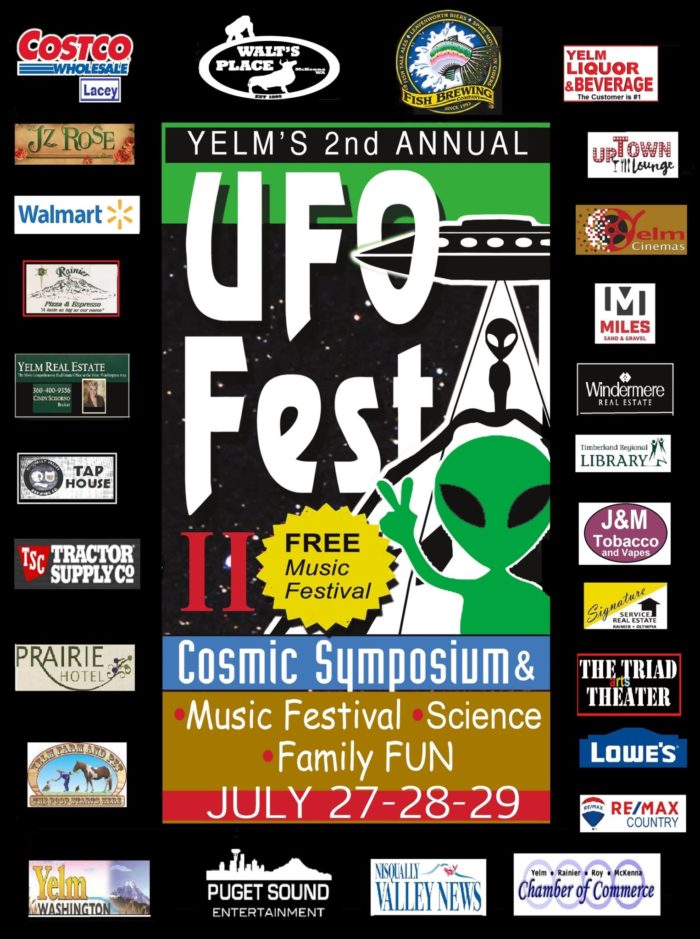 – Editor’s Note:
Times ARE a changin’ here.
Yelm was heralded this week in The Olympian with the nickname a ‘woo-woo’ community, derived after Ramtha’s School of Enlightenment (RSE) garnered worldwide acclaim for our town when the school was created here in 1988, became one of the spiritual world’s hubs for over 3 decades, and embraced the existence of UFOs. Now, 30 years later, many local businesses have finally joined in to reap the benefits of being supporters, hosts and sponsors of UFO Fest, begun with the inspiration and insight of RSE student Jayne Cameron. Why even the City of Yelm, which long-held the school as anathema to this town, has joined as an event sponsor/co-host. And the NVN is also a sponsor, always following the money of headlines to increased newspaper sales.
Times ARE a changin’. Have fun in Yelm this weekend.

– The Olympian:
“Yelm embraces its ‘woo-woo’ reputation with UFO festival and symposium”
“Olympia has Lakefair. Shelton has OysterFest. And Yelm has this weekend’s UFO Festival.

“The second annual event, part free music festival and part paid symposium on space aliens and other out-of-the-mainstream topics, celebrates the city’s reputation as home to a wide array of people with a wide array of beliefs.

“‘It’s a beautiful way to embrace diversity under the umbrella of welcoming the aliens and anything else that is not the same old same old,’ said organizer Cameron Jayne, director of arts at Yelm’s Triad Arts Theater. ‘Yelm is known as a woo-woo community, so I figured we might as well play it up.’

– From The Olympian:
Friday (July 27) — Sunday
“Celebrate the great unknown in Yelm this weekend”

“If you’re looking for something a little different, head to the Yelm UFO Fest this weekend. It’s a event in two parts: a free festival and a Cosmic Symposium geared for sci-fi and extra-terrestrial fans. The festival features live music, entertainment, various carney tent shows, hot air balloon rides, a kids’ play zone, food and more family-friendly fun. Bring a blanket to enjoy the entertainment. The symposium, in an air-conditioned tent on the grounds, will feature talks by UFO experts; tickets are sold to each lecture. Hours are 4-10 p.m. Friday, 11 a.m.-10 p.m. Saturday and 11 a.m.-7 p.m. Sunday. It’s all happening on Prairie Park Lane Southeast in Yelm. Go to thetriadartstheater.com/yelm-ufo-fest-details for more information.
Read more