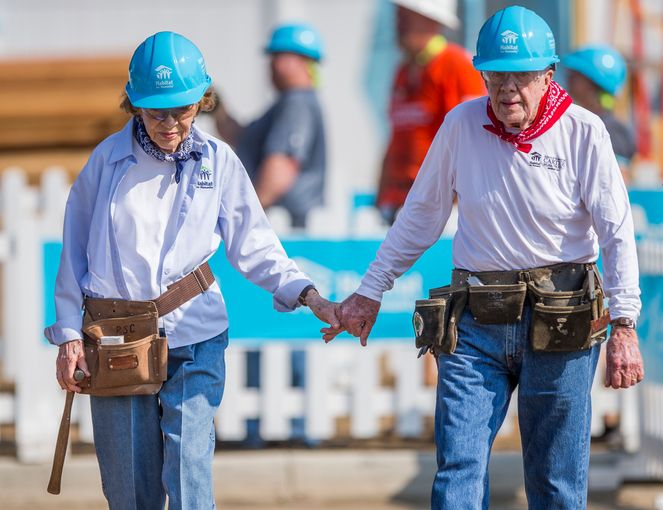 – Editor’s note:
If you would like to join South Puget Sound Habitat for a day of building on their construction sites, click here! SPS Habitat is a volunteer driven organization serving families and communities in Thurston County.

– “Letterman and Carters launch Habitat project at Notre Dame”
“From their seats, almost 4,000 people watched former President Jimmy and wife Rosalynn Carter walk into the Purcell Pavilion, as a man with a long white beard tagged along.

David Letterman. It had been a secret. Even some of the local Habitat for Humanity staff didn’t know the retired late-night TV host would be there Sunday [Aug. 26] at the University of Notre Dame. Not just to kick off an intense, five-day work blitz for 2,000 volunteers building homes in Mishawaka, known as the 35th annual Carter Work Project. But to introduce the 39th president.”

“Jimmy Carter, 93, strolled to the podium in jeans and a button-down Habitat shirt, with his wife of 72 years, Rosalynn, 91, beside him. He quickly started to pay tribute to the “best volunteer we’ve ever had,” their close friend, LeRoy Troyer, the Amish-born founder of a Mishawaka architectural firm, who for 33 years has been the boss on the house where they’ve toiled. Troyer, who has served on Habitat’s international board, is also a key reason that this week’s massive build is coming to St. Joseph County,” by Joseph Dits, South Bend (IN.) Tribune.
Read more