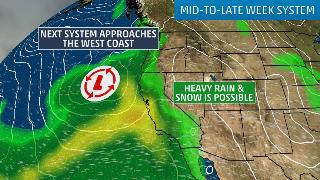 Back to back storms aim at west coast
Credit: Weather Channel

– “A storm that is expected to bring three to four inches of rainfall between Sunday night and Tuesday could cause rives to run high in Snohomish, Skagit, and Mason counties.”
“Three to four inches of rain could fall between Sunday night and Tuesday. All this rain will increase flood threat around tributaries. That combined with snowmelt could create local flooding around Western Washington.

“Rivers will be running very high once this storm moves in [from the Thanksgiving Day storm].”

“November is known for bringing Washington the most rainfall of any other month, but that didn’t quite happen this month. Before Thanksgiving’s storm, we had less than one inch of rainfall at Sea-Tac Airport. The average for this month is more than 6.5 inches,” by Jordan Steele, KING-5 TV News, Seattle.
Read more

– “Active Weather Pattern Will Bring Heavy Rain and High Elevation Snow Back to the West Coast”
“Rain will begin early Monday for parts of western Washington and spread inland across much of the Pacific Northwest during the day. Rainfall may be heavy at times in the higher terrain of the Olympic Mountains and the lower elevations of the Cascades of Washington and Oregon,” by Jonathan Belles, Weather Channel.
Read more“>Read more