A Review: ‘Shrek The Musical’ debuts at Yelm’s Triad Theater, A Thanksgiving holiday treat for the whole family thru Dec. 9! 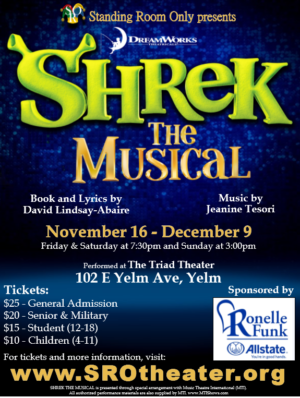 – REVIEW
I just returned from the fabulous Dress Rehearsal to file this report.
A delightful production for the whole family as the 2018 holiday season gets underway.
The musical directorial debut of the multi-talented Kevin McManus simply reflected this treasure (McManus) we have in our community, joined by these extraordinary magicians: Musical Direction by Claudia Simpson Jones, Choreography by Marcela Martinez & Fred Loertscher,and Producer Dawn Emilia Young.

The stellar performances by Charles Wolff as Shrek, Jennifer Redston as Princess Fiona, Jalen C. Penn as Donkey, Kalen McCrea as Lord Farquaad so lifted this production, and Lillith Era as Teen Fiona & the Fairy Godmother and Taylor Gossett as Child Fiona were standouts. The cast was together in enunciating the songs and raising their chorus in both volume and unison, which was very noticeable and effective. I am always amazed at the versatility of Jesse Geray as Peter Pan and other roles. He has such a terrific stage presence that his confidence/experience affects the cast when he is on stage.

Take your family and go see the amazing talent we have uplifting our community theater!

– STORY SUMMARY
“SHREK THE MUSICAL tells the story of a swamp-dwelling ogre who goes on a life-changing adventure to reclaim the deed to his land. Joined by a wise-cracking donkey, this unlikely hero fights a fearsome dragon, rescues a feisty princess and learns that real friendship and true love aren’t only found in fairy tales.”

Let your “Freak Flag” fly while you get carried away by the brilliant cast of SHREK THE MUSICAL this Fall!