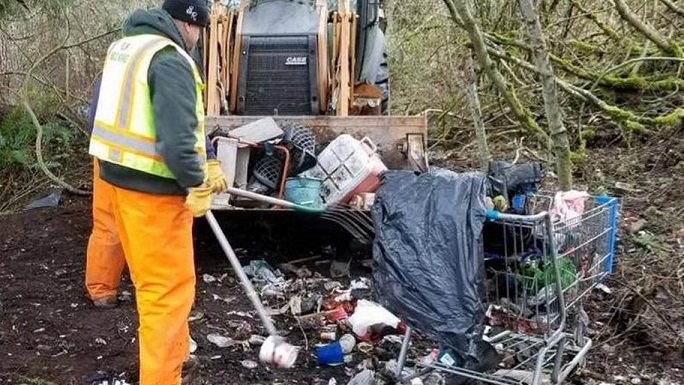 Story highlights
* The Olympian reported Monday morning about Yelm homeless camp clean-up outrage,
* Sister newspaper Tacoma News-Tribune picked-up the story Monday evening,
* Both will have the details in their Tuesday print editions.
* The City of Yelm Government Facebook page started a Public Relations (P. R.) mess,
* Demonstrates Yelm needs to hire a social media savvy P. R. messaging firm,
* Mayor Foster makes some good points, though being “right” not always the best P. R. response.
* With the homeless challenge now at Yelm’s doorstep, the time has come for Foster to convene a homeless policy task-force, for this is just the beginning of more issues like this arising.

He encouraged those concerned about the cleanup to call the city directly or to attend a Yelm City Council meeting.”
Read more in the Tacoma News-Tribune.

– Editor’s note:
The City of Yelm government makes headline news once again that needs addressing from a public relations point of view, especially when the ramifications from the execution of a decision are not thought through, as also in the community center’s perpetual use contract. Why doesn’t the city convene all of our church & RSE leaders together, as is done elsewhere, to discuss ideas for handling Yelm’s homeless situation. Perhaps using the United Way-funded UCBO building as a shelter only at night could be considered. The homeless situation coming to Yelm’s doorstep has been raised here many times.

– Bottom line:
While Mayor Foster made some excellent points, he can be “right” all he wants however the public relations outcry this has become demonstrates Mr. Foster needs to work with the community to craft a plan to deal with what is set to become a growing challenge here. Mr. Foster and his staff are not social media savvy and like Mayor Haring before him, have made some very serious gaffs (i.e. White Horse Tavern banners) and need to hire a Public Relations messaging firm.

– “Yelm cleanup of homeless camp sparks outrage on city Facebook page”
“After those details and photos were posted [of a Yelm homeless camp clean-up], not everyone was pleased. Among about 50 comments, many raised concerns about the homeless who used to live in that camp and the whereabouts of their belongings.”

“Check back for updates to this story. The Olympian has called the Yelm mayor for reaction,” by Rolf Boone, The Olympian.
Read more

* People without homes are not problems to be cleaned up. They are human beings who most need our help.

* Why is the city of Yelm bragging about displacing people from the place they lived, a place out of view of the housed, a place even they describe as public land.