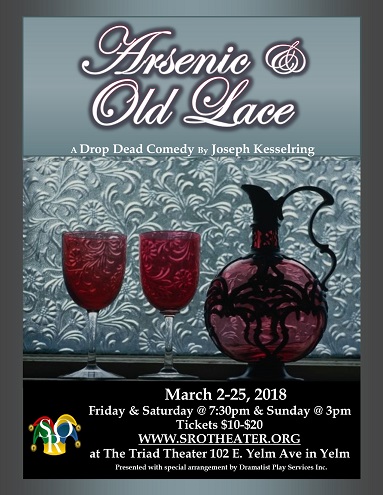 – Arsenic & Old Lace Opens Friday, March 2nd for a month run.
“This Classic laugh out loud comedy is to die for!!”
Click here to BUY TICKETS.

“Arsenic and Old Lace is a high spirited dark comedy classic of American theater revolving around two spinster aunts whose generosity and kindness are famous in their Brooklyn neighborhood. Their nephews: a Teddy Roosevelt impersonator, a murderous escapey from a prison for the criminally insane, and a theater critic in love with the minister’s daughter next door, and the Police.

Inspired by real-life serial killer Amy Archer-Gilligan, who was convicted of poisoning her borders for their pensions, Kesselring initially set out to pen a horror/melodrama with the title Bodies in Our Cellar. He sent the script to actress Dorothy Stickney, hoping she might consider playing one of the aunts. The interest of Stickney’s husband, producer Howard Lindsay, was immediately piqued when he heard his wife gasping with laughter as she read. Lindsay joined forces with frequent partner Russel Crouse — the two were fresh off the Broadway hit Life with Father — to purchase the script. Together with Kesselring, they completely reworked it into a comedy. In a moment of inspired writing and casting, the character of Jonathan Brewster was said to look like Boris Karloff — and Karloff himself was convinced to play the role on stage. Arsenic and Old Lace debuted on Broadway in 1941. New York Times theater critic Brooks Atkinson wrote that it was “so funny none of us will ever forget it.” The New York Herald Tribune called it “riotously hilarious,” and the New York Herald-Tribune pronounced it “side-splitting and terrific.” It went on to play 1,444 performances and was made into a now-classic film directed by Frank Capra and starring Cary Grant.”