Most expensive property ever listed for sale in Pierce, Thurston, or Mason counties, $11 Million home for sale in Tenino 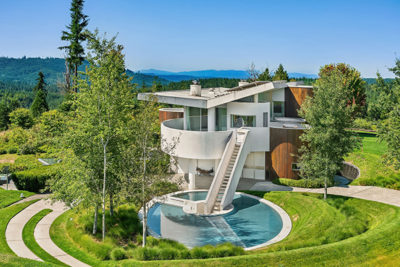 “Oppenheimer spoke to me by cellphone from Cape Town, South Africa where she now lives with her two children, who are 13 and 10 years old.”

“Rebecca Oppenheimer is a very holistic person and her manse in the Tenino/Yelm area of Thurston County, which she designed as her dream home, reflects that,” Patti Payne, Puget Sound Business Journal.
Read more

– “Diamond Heiress’ $11 Million Home for Sale in Tenino”
“High upon a hill in Tenino stands an out-of-this-world custom home built by the heiress to the De Beers diamond fortune. It can be yours for $11 million — the most expensive property for sale in Pierce, Thurston, or Mason counties,” by South Sound Business.
Read more

“A diamond heiress is selling the estate she built on a hill in Tenino. The home’s design and amenities are eye-popping. So is the price: $11 million.”

“Why did she have it built in Tenino? She hasn’t said publicly, but there are clues she wanted to live near Ramtha’s School of Enlightment near Yelm,” by Craig Sailor, Tacoma News-Tribune.
Read more