Dr. Miceal Ledwith should be issued a formal apology 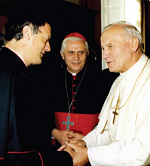 On Friday, January 15 at 5:39pm the NVN published online a list of “77 alleged child-sex abusers” disseminated that afternoon by the Archdiocese of Seattle, adding their own spin to what was posted as a story from the Associated Press. In seemingly a rush-to-judgement in getting an online story filed just to go home for the long holiday weekend, gross inaccuracies were reported.
Pastor Jeff Adams of Yelm’s Paramount Christian Church was quick to “pile-on” with a defamation of character comment in the NVN online edition the following day. The online story was published in the print edition January 22.

In the newspaper’s follow-up report of January 29, this story sub-title could be hardly more unfair and unbiased:
“RSE Teacher in Group Never Convicted of Child Sex Abuse”

The title is very misleading by implication because Dr. Ledwith was never charged with any such thing.

When he arrived as NVN Publisher/Editor 3 years ago, Michael Wagar promised a newspaper providing “balance, honesty and respect,” yet with Dr. Ledwith, the newspaper maligned and discredited the integrity of this fine man.
“Balance, honesty and respect” was at the far end of the spectrum from destroying the reputation of an area citizen, and also discrediting Ramtha’s School of Enlightenment (RSE).

Mr. Wagar told me on his arrival here,
“I am not your friend, nor am I your enemy, however I will be fair.”
While his newspaper’s follow-up report with the facts was admirable, the title and the the initial headline story was acrimonious, not fair.

Therefore, in the interest of “balance, honesty and respect,” I call on Mr. Wagar and Pastor Adams to issue a formal apology to Dr. Ledwith. That would be “fair”!